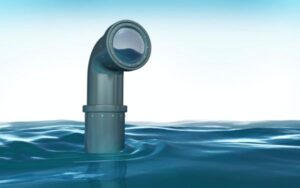 A periscope is a very handy instrument used to observe activity above the water’s surface from a submerged submarine.   When the command “up periscope” is given the periscope is raised for use.   Once in place, it has the ability to swivel around for surveillance in all directions.

We often refer to disposition problems in cattle as the up-periscope syndrome.   When you come in close contact with a herd of cattle, those with a nervous disposition will quickly raise their heads in the air and start looking back and forth like an extended periscope.   They’re not going to be caught unaware.   This might be considered a good trait if today’s cowherds still had to contend with lions and other large predators.

As it is, though, the up-periscope syndrome is not a trait most of today’s cattlemen want in their cattle.   In fact, it is considered to be very detrimental.    Cattle with wild or nervous dispositions have poor performance.   They are difficult to handle and they are very hard on fences and other structures.    They can also create major health risks to their handlers.

We monitor disposition very closely in the bulls we sell because we know it’s important to our customers.   All of our bulls have been put through a simple test that allows us to give them a score for disposition, from 1 to 5.   We sort each bull off by himself in an alley and crowd him between two to four people.   This measures the bull’s comfort zone, as well as his disposition.   A bull that will stand calmly, with no signs of excitement or nervousness, will receive a high score.   If a bull gets nervous and/or tries to run past us, he will receive a low score.   If a bull acts like he might run over us, he is sent to McDonalds.